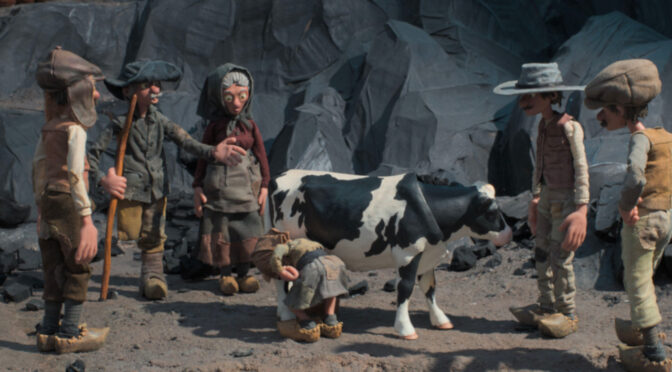 Memories of a distant past that gradually fades in time often remain linked to an ideal world reworked by our minds to preserve emotions, sensations, fleeting instants of our existence in which we have, even for an instant, savoured flashes of true happiness. Manodopera recounts the world evoked by the sweet and nostalgic words of a grandmother, restoring the memory of a bygone era, made up of sacrifices and carefreeness, suffering and love.

The location, recreated in stop-motion, is a small mountain village at the foot of Monviso. It is called Borgata Ughettera and recalls the director Alain Ughetto’s Piedmontese origins. The film comes to life through the words of Cesira, his grandmother, who thinks back to her youth towards the end of the 19th century. Starting from some fundamental events, she thus gives rise to a reality suspended in time that is emphasised by the fragile malleability of the plasticine with which the characters are made of.

Between cardboard houses and bizarre broccoli trees, the objects somehow represent an indispensable aspect of the story; tangible elements whose purpose is to bring the sweetness of a memory closer to the purity of nature. The simplicity of the poor peasant world, the meeting with her future husband Luigi, the difficult periods of war and the need to emigrate to France in order to work and survive: these are the episodes that characterise Cesira’s past and that she describes to her nephew, in a surreal and poetic exchange between the animated universe and the real presence of the director on stage.

What Ughetto wanted to tell is not only the story of his origins, but also the story of all immigrants, wherever they come from in the world. A story of hard work, of adaptation, of gazes that lacerate the soul and leave irremediable wounds. This is why certain stereotypes in the film take on a different meaning, as if they were the images perceived by those who feel invaded and – not knowing other cultures and not understanding the languages spoken by migrants – judge those from other countries as inferior. As the original title makes clear: “forbidden to dogs and Italians”, a dramatic situation that our families have had to live with in the past and that is being played out again today, this time through the eyes of the viewer.