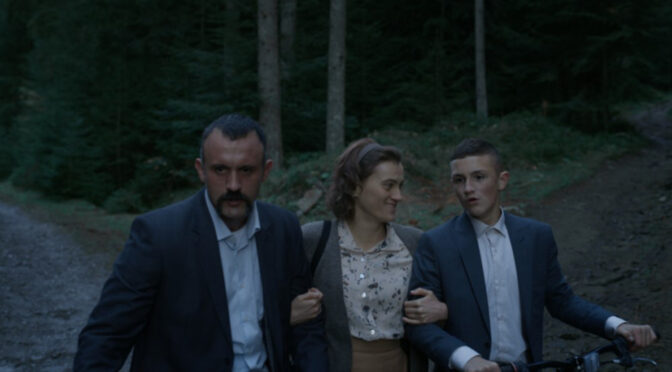 “So Abraham got up early in the morning, saddled his donkey, and took two of his young men with him and his son Isaac; and he split the wood for the burnt offering, and then he got up and went to the place of which God had told him.” Genesis 22:3

The biblical account shows that Abraham, moved by great faith, had no hesitation. Leonid, however, is a pagan, Leonid does not believe. And in order to offer the best future to his progeny, he is willing to transgress ethical norms and human laws, consequently going so far as to defy God.

Dmytro Sukholytkyy-Sobchuk’s debut in feature-length fiction films, presented in competition at the 40th Torino Film Festival, is a cinematic hypnosis that finds in the multi-ethnic region of Chernivtsi the pivotal place where it can be told. On the Ukrainian-Romanian border, the preparations for the Malanka celebrations – a Ukrainian carnival festival – provide the setting for the story of Leonid (Oleksandr Yatsentyuk), a former cross-border smuggler, who, after a desperate act of arson committed by his teenage son Nazar (Stanislav Potyak) is forced to return to his old job, old habits, old risks.

Thus, as in the most famous Kafkaesque tale, a metamorphosis takes place in the film. Leonid changes into Pamfir, his animalistic alter-ego, and becomes a pagan warrior who, moved by love for his family, chooses to fight with his bare hands against the one who is seen by many as a God. The pagan carnival, where Christian beliefs find no support, may prove to be the best ring in which to do so.

Amidst articulated sequence plans, capable of slipping from long shots to close-ups with extreme ease, the Ukrainian director compiles a film in motion, which scrupulously draws on historical and mythological sources as the minutes go by. These references transform Dmytro Sukholytkyy-Sobchuk’s debut feature into a Greek tragedy, which, although painted in bright colours, always manages to retain the fatalist spirit that characterises its adherence to reality. Because Pamfir, in conclusion, from 24 February 2022 has necessarily become a historical film, a testimony to the Ukrainian identity forced to fight not to be crushed by the hammer and sickle.