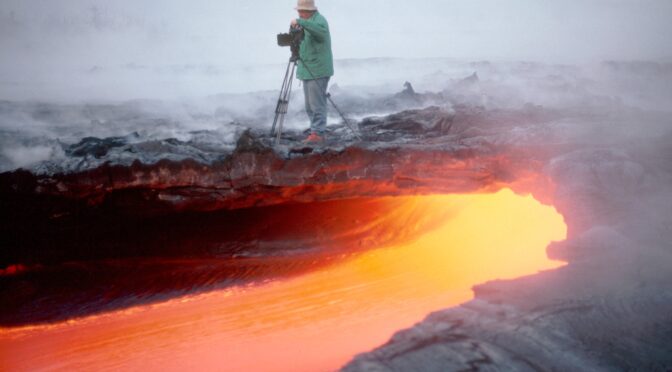 The Fire Within is a film that focuses less on Herzog’s interest in volcanoes – already demonstrated in La Soufrière (1977) and Into the Inferno (2016) – than on the work of Katia and Maurice Krafft. A requiem, as the subtitle suggests, that revolves around the death of the two famous volcanologists while they were closely studying those giants towards which they felt a real obsession.

Unlike Sara Dosa’s coeval documentary (Fire of Love, 2022), which focused on the love story between the couple and their passion for volcanoes, Herzog’s work focuses on the couple’s work, not so much scientific as artistic, which bequeathed more than 200 hours of filmed material, a legacy of inestimable value and testimony to an extraordinary imagination.

Herzog uses only archive material, as he had already done in Grizzly Man (2005), to suggest, through editing, a personal viewpoint on the work of the two scientists. The footage is of expeditions to the most inaccessible and remote places in the world, of trips to the peaks of volcanoes, but above all of the impressive eruptions and torrential lava flows. The voice-over suggests an interpretation of the Krafft’s imagery, but steps aside at the most intense moments, letting the images do the talking. Faced with such fascinating and hypnotic, almost abstract footage, it is impossible not to share Herzog’s point of view: the two volcanologists were also visual artists, creators (or, one might say, seekers) of extraordinary images. The only thing they could not deal with was editing their images into a film, because, according to the director, they did not have time before their untimely death.

According to Herzog, in the two scientists there was not only an interest in research, but also a morbid desire to obtain extraordinary images, to push themselves beyond the limits of the representable in a challenge with themselves and their own limits. In this sense, the two volcanologists embody the ideal Herzogian hero, those mad dreamers who populated his cinema, like Fitzcarraldo, who had a ship hoisted on the top of a mountain, or Timothy Treadwell of the aforementioned Grizzly Man. Like Herzog, the Kraffts were obsessed with the search for extreme and ever new images. They pushed the boundaries of documentation, trying to capture the mysterious essence and destructive energy of nature. But wanting to film the unknown, they were devoured by their own obsession. What remains are the images, extraordinary and immortal.