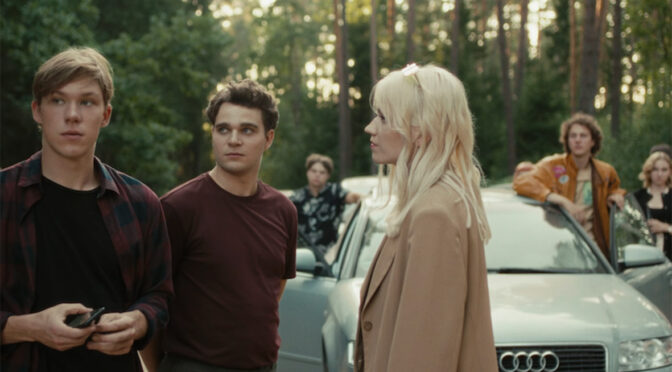 A class in its last year of high school, a wild party in a remote cottage in the woods of Lithuania, a masked serial killer. These few elements are enough for any horror connoisseur to guess where Jonas Trukanas will take us with the narrative of Pensive, his first work competing in the “Crazies” section of the 40th edition of the Torino Film Festival.

The slasher soul of the film is unquestionable and revolves around the mysterious figure of Algis (Marius Repšys): on the one hand, the classic threat to the protagonists’ lives, slow and inescapable as in the best tradition of the genre, on the other hand, closely linked with Lithuanian folklore. In particular, the tradition of the “pensive Christ” is central and is referred to by the wood-carved sculptures, which depict Jesus in a moment of contemplation while holding his head and give the film its title. These icons, suspended between the sacred and the profane, are omnipresent: in addition to making the aesthetics of the film peculiar, they are also symbols of the old society from which the characters try to escape; a society that observes them and judges them for their behaviour, and then materialises in the figure of the ruthless killer.

The director plays with full awareness with the stylistic features of the genre he is confronted with: he goes so far as to produce moments bordering on the grotesque and parody that challenge the viewer’s suspension of disbelief. However, the intention to plumb the possibilities conferred by the young age of the students involved in the story is clear. Indeed, beneath the surface lies a real coming of age. If the set of characters is full of supporting roles that largely follow the clichés of the aforementioned slashers, Marius (Sarunas Rapolas Meliesius) is a protagonist to be constructed. In fact, he finds himself facing adolescence with a perpetual sense of inadequacy, constantly pushed aside by his parents and classmates, undecided about what kind of person he wants to become, poised between a boring existence and the desire to fully experience his emotions. Therefore, the search for the self turns out to be the fundamental core of the film. Indeed, the characters’ struggle for survival begins long before the woodland killer enters the scene, and only those who are willing to embrace their humanity – with all that this entails – will survive in the great battle for the future.