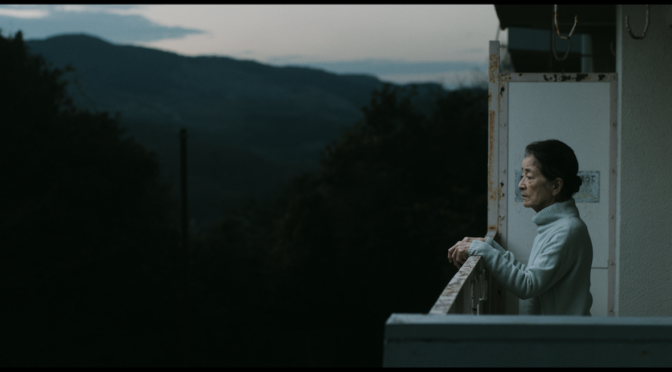 Michi (Chieko Baishô) evokes memories of her past over the phone: she goes through her life with great melancholy, and she appears grateful to have someone to listen to her. Nothing but her own voice can be heard in her kitchen. On the end of the phone, we find Yoko (Yumi Kawai). She is much younger than her and she remains silent. Even though she would be interested in the old woman’s story, her head is elsewhere. A sudden alarm interrupts Michi’s flow of words: her time is up. Yoko is holding back tears. Eventually Yoko explains to her what will happen the next day and she keeps begging her not to do “it”. Michi hushes “Sayonara.”

Plan 75 is the debut feature film by filmmaker Chie Hayakawa which premiered in Italy during Torino Film Festival. It is based on the director’s homonymous short film – contained in the episodic film Ten Years Japan (2018) – and takes its name from it. The setting is a close but undefined future, in which the Japanese government decides to take measures to contrast its aging population: the introduction of free euthanasia for all citizens over the age of 75. Hayakawa creates a skillful narrative plot which is free of sentimentality and gradually unfolds by following the stories of three characters, all directly connected to the political program. However, among the co-stars, Michi can be considered the standing out character: she is a 78-year-old elderly woman with no family, whose debts drive into the acceptance of the government solution.

The methodical nature of the narrative allows Hayakawa to show the more cynical and tragic facets of this new, despotic reality, while slow camera movements follow the pace of a tired and burdened old woman. This is the director attempt to reproduce and internalize Michi’s stillness and resignation while showing how the world has changed. The silence that dominates the entire film, as well as the almost total absence of extradiegetic music, invite the viewer not to “shut their eyes” and to focus on the visual dimension and images.

Plan 75 directly interrogates a society that comes up with benches with fanciful architectures so that homeless people cannot sleep on them, because if you don’t work, you have no right to rest; a society that induces human beings to give up their very existence claiming that an unproductive life is no longer worth living; a society that provides those who opt for euthanasia 15 minutes of psychological support (not a second more). “Human beings cannot choose when to be born, but they can choose when to die” is the slogan designed to push for assisted suicide. This is the scenario outlined by the director in a future, perhaps, closer to us than we might think.