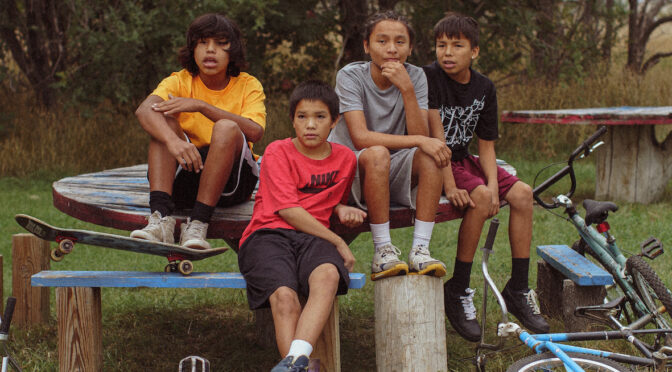 Presented and competing at the fortieth edition of Torino Film Festival, and already winner of the Camera d’Or at Cannes, competing in the Un Certain Regard section, War Pony marks the directing debut of actress Riley Keough and producer Gina Gammell, featuring an inspiring portrait of the Native American community, directly involved in the making of the film.

The plot intertwines the narratives of two young Oglala Lakota natives, born on the Pine Ridge Nature Reserve in South Dakota. Twelve-year-old Matho (Ladainian Crazy Thunder) wishes to become an adult soon and when he discovers he can sell his addict father’s drugs, he starts dealing. Bill (Jojo Bapteise Whiting), on the other hand, is twenty-three years old and is looking for a way to earn money to support his two children born to different women. The protagonists’ stories unfold in a linear narrative, with predictable yet inevitable outcomes, creating a hopeless double portrait of indigenous youth, forced to confront the contradictions of the social context in which they are born.

The idea for the film stems from Keough’s meeting with two Native Americans who were working as extras on the set of American Honey (Andrea Arnold, 2016). The filmmaker was so fascinated by the two that she developed an affectionate bond with the indigenous community that she then directly involved in the making of the film. But War Pony owes so much more to Arnold’s work: not only because she facilitated that fortuitous encounter, but also because she proved herself influential in the freshness and honesty with which Keough portrayed the new youth of provincial America, made up of troubled and parentless youngsters in search of the American dream, in conflict with a reality that pushes them adrift. In War Pony, the ethnic issue is added, giving a voice to a minority of young people who are far removed from the traditions of their culture of origin, yet marginalised for their diversity.

The two directors’ look at the young protagonists and their community is sincere and affectionate, not avoiding showing the problematic aspects of their lives, insisting on the existential drama without ever being dishonest or indiscreet. The camera follows them in their daily lives without passing judgement, but denouncing the living conditions to which they are forced, the lack of maturity of adult figures and the lack of prospects for a better future. A critique that is fully in line with the ideal of an independent American cinema concerned with depicting marginalised social realities.