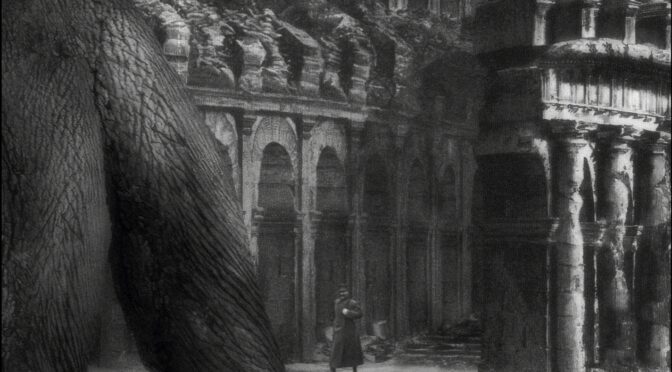 The main difference between us and History is that History does not speak, but we force it to do so. What would happen, however, if it looked us in the face, took us by the hand and started making small talk, telling us about its regrets and pipe dreams? This is exactly what Aleksandr Sokurov’s “Fairytale” aims for: to make History speak spontaneously, quietly and with a hint of humour.

Adolf Hitler, Iosif Stalin, Benito Mussolini and Winston Churchill find themselves reunited in the afterlife, chatting as they wander through a dark, foggy forest, waiting for the gatekeeper to decide whether to let them into heaven. What about the content of these conversations? Despite their different languages, they mock each other while asserting their political and social ideals. Their speeches focus on their private dimension and therefore erase the aura given by their public function and by History itself. Words thus serve as a tool to reconcile the different points of view and as an attempt to overcome the past and the crystallised image we have of these historical figures. Built through archive footage and without the use of deep-fakes or other artificial intelligence tools, the film calls into question the relationship with reality, verisimilitude, memory and the demythologisation of these personalities. This is an objective that could not have been pursued by using actors to replace the faces, bodies and gestures that changed history. Moreover, the voices lent to the protagonists are perfectly given through an excellent lip-sync that breathes life into the faded images shrouded by the misty reminiscence of the past.

Sokurov seeks to make sense of the challenges that mankind is facing nowadays by taking a step back and lingering on the figures who most shaped the reality we know, namely the protagonists of World War II, the main event that eradicated positivist beliefs about human progress. Trying to empathise with figures such as Hitler and Stalin is the arduous task proposed to the viewer, who through this process realises that behind every historical event, even the most terrible and evil, there are men.