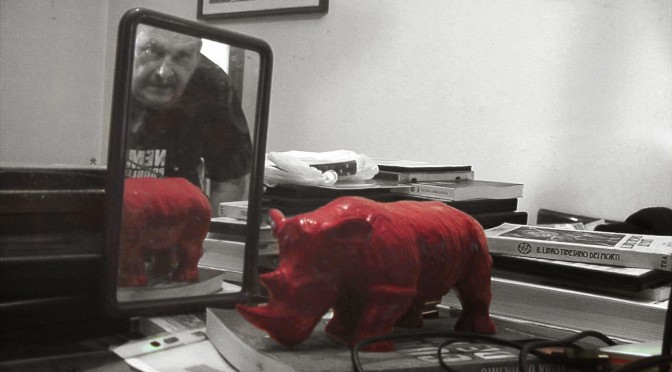 “Filmmakers must be merciless, or they are for the catering”

Alberto Signetto was definitely merciless. He loved to consider himself as a rhino because he was a “treacherous, stubborn, fat, bulky and hardly tameable animal” and he represented the fight against conformism. “Walking with red rhino”, the last film by Marilena Moretti, pays homage to one of the most underestimated Italian personalities of the 20th century.

“I’m walking with my worn-out shoes”. This is what our rebel genius wrote in his last letter, before he was taken to Jena psychiatric unit. Gottfried Benn and his poems, Hölderin, Bataille’s philosophy and an unconditional love for the Cinema, with a capital “c”, that can destroy hearts and re-assemble them as it likes. This is “Walking with red rhino”, a homage to Alberto Signetto, a forgotten or rather never-recognised artist.

Marilena Moretti, a filmmaker from Turin, creates a unique documentary full of catastrophic optimism, which represents the artistic will of a genius of experimental cinema, who died in January 2014. It is the story of a bohemian life made up of evictions, never ending journeys and pockets filled with holes. Alberto Signetto was living a dead life in a world that kills certainties. The shots give us different aspects of his life: the intemperance, irony and tragedy of a man who bears a disease that consumes his soul.

The cleverness of Marilena Moretti lies in her choice of adding some of Signetto’s short films, reviving them from forgotten and dusty archives. Among these “Weltegenie”, set in an impersonal Lingotto (a quarter of Turin), and focused on sublime and surreal characters involved in a dramatic testimony of a haemorrhage that was filmed by Signetto himself.

“Walking with red rhino” is a protean film. It makes you smile but at once moves you to tears in the final part, because it is a real documentary about sorrow.