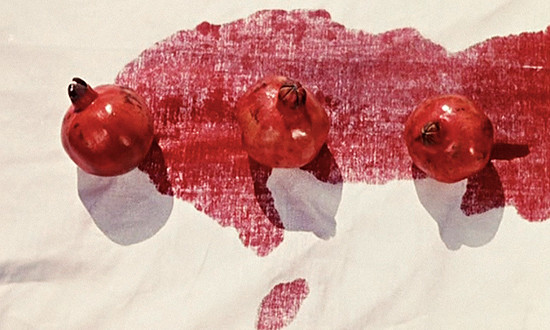 Sayat Nova was an Armenian poet who lived during the XVIII century. He was a troubadour who used to chant his poems in three different languages. He was also a monk who spent his life through sufferings and bad times- as we came to know during the whole film.
He was deeply in love with princess Anne belonging to the court of Georgia.
Sayat Nova is a complicated and almost mythical character.
The Russian director Sergej Parajanov told us about his life in this feature movie that had a difficult life as its major character himself. In fact this movie has been censored by the Russian government that compelled his author to change its title from Sayat Nova- which was the name of the poet- into The colour of pomegranate- which is one of the many living picture of the movie. Julian temple has chosen to show it at the TFF 33 in his own personal selection A matter of life and death. We can reasonably understand why he has chosen this film. The poet’s life is narrated by using a dreamlike, surreal, pictorial and symbolic style. We can immediately perceive the high sense of death, which is not meant as just physical death- the common destiny of everyman- but as a psychological death due to those continuous hints to suffering.

During the movie, which lasts about one hour and 30 minutes, human beings who are acting as mime don’t even utter a world. Anyway there are some extra diegetic voices that are represented by the writings in old Armenian language. They look like the captions we used to find in silent cinema. We can also hear some noises that are amplified to the extreme- such as the collective bite of pomegranates or the water heavily falling down the legs of the monks.
Each frame has such a vivid and allegorical colour that it looks like a living painting in the end. There are some recurrent colours: red, white and blue. They show their deepest tones that are those of the typical Armenian decorations when Sayat Nova was living there. The 4:3 is helpful to this pictorial research made by the director: each frame has some typical elements that are complementary such as it was a painting. Nonetheless this is actually a painting but we have to consider the fact that all the images are connected to the others since we have to remind that it’s a movie in the end. There are some elements such as some animals and some objects that without doubt remind to a semiotics study and would require at least a second vision of the film: roosters, pomegranates, a shell and a white lace that turns into red.

A first vision of this movie causes a double feeling to its audience: it is caught by the splendour of these images but at the same time it feels conscious that they won’t be able to re-elaborate what they have just watched in a rational thought.
Then it’s highly recommended to watch this movie another time, maybe three times, maybe undefined number of time if you want to grab its deep and mysterious meanings. In fact after watching Sayat Nova we have perceived such a splendour that we just have the feeling it would necessary and pleasant at the same time to watch it another time.