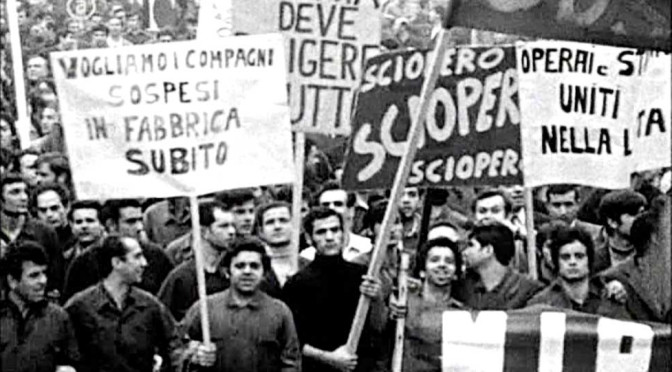 Contemporary images of FIAT plants during the night covered by the machinery’s noise. Break. Second worldwide postwar period: Sicilian children are interviewed about the matter “Where are you dads?” “They are in Germany”.
This is the beginning of Francesca Comencini’s documentary entitled In fabbrica: Cipputi Award winner in 2007 as the best film about work. This year Comencini has received the lifetime achievement award in TFF.
During the Fifties Italy relies on industry, in order to improve working life, which can guarantee a better lifestyle. In a short dialogue between a journalist and a worker we hear “Is it easy to find a job?”, “Yes, there is a lot”, which causes some astonishment among the modern spectators, who got used to the term precariousness. But those years represent the highest point for the local economy, the so-called economic boom: from all the areas of the peninsula people move towards the big northern industries, so as to find a job. “Would you come back home to Naples?”, “No, not even if they covered me with gold”, this is the reply given by a girl defending her new status of worker. The interviewed show themselves to be always satisfied, in a time when job is a source of money and sustenance. What is more, it is something, which people can be proud of. On the other hand, this period also witnesses a strange combination between guaranteed jobs and black market labour, sometimes related to child labour.
Those years give progressively birth to a class consciousness, which results in the first FIAT workers uprising in 1962. If it is true that they get better work conditions, more problems seem to arise like that concerning the housing of people coming from the south. As a female worker stated in 1968: “those who always work by using their arms, lose mental agility, memory and thinking ability”. This situation leads towards new strikes aimed at removing production lines: workers now want to take part at the production activity, not only by tightening bolts, but by putting something of their own into the final products.
With the 80’s the concepts of profit and progress come onto the scene and automation systems are adopted in the firms. Workers form picket lines surrounding FIAT plants 35 days long, the firm replies imposing unemployment insurance. On 14th August, 1980 workers not involved in the measure, together with common citizens, demonstrate in the streets of Turin. It is the so-called “March of the forty thousand”; an invisible crowd of people opposing workers strike and demonstration. The unprecedented event is a sign of a rising individualism and negation of class consciousness. From that time on, there were in fact no strikes anymore.
Nowadays factories are still there but their workers have become a sort of invisible entity: none of them thinks about protesting or striking. There is an emptiness in terms of unity, that same unity which would let the situation change. Above all, none seems to believe in change anymore. A sense of resignation and indifference has spread among workers causing the maintaining of the status quo, which was conquered through efforts during those years, when consciousness of factory workers in Italy was born.