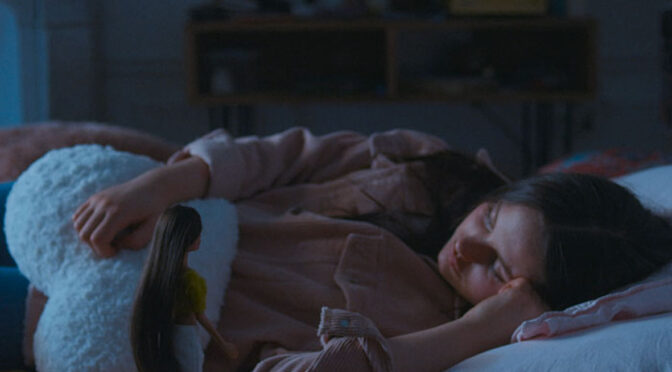 ‘Dear Anna, this is not the first time I have addressed you in this way’. It is with these words that Bertrand Bonello’s latest film begins. Words which pave the way to an open letter full of love and sensitivity addressed to his teenage daughter. The director had already tried to communicate with the girl through the cinema with Nocturama (2016). Some images of this film appear at the beginning of Coma in a confused montage that turns the frames into pure abstraction. The previous effort to get in touch with his daughter had been unsuccessful, since she had not seen the film. For this reason, Bonello tries again, making a more intimate, personal and, at the same time, universal work that addresses his daughter and also new generations.

Louise Labèque, already starring in the previous Zombi Child (2019), is a girl who has come of age with the outbreak of the pandemic. She is therefore forced to live her first moments of coming of age confined to her room. Between fears and insecurities, but also humour, the girl accompanies the chaotic and uneven vision of the film, in which the tension between dream and reality, triggered by a constant state of confusion between sleep and wakefulness, gives rise to a series of surreal situations. Leading the way is the mysterious YouTuber Patricia Coma (Julia Faure), a mentor for the girl.

With Coma, Bonello returns a personal vision of the lockdown experience, represented through the opposite of its monotony, that is, visual hypertrophy, the accumulation of images of different formats and styles as if to identify chaos as a distinctive element of contemporaneity. Different visual solutions coexist in the film, from live action – with which we follow the moments when the protagonist is awake in her room – to animation, both drawn and in stop-motion, used to give life to the dolls with which the end of a love story is re-enacted. The night effect is used during dream sequences, while surveillance camera footage follows the girl’s few outings into the outside world. Then there are video calls with friends, videos from Coma’s channel and archive images such as those in which the philosopher Gilles Deleuze appears, all building up the visual magma from which the reflection on dreams emerges.

But Coma is also a film about growing up, about how to tackle life’s difficulties in order to become an adult, overcoming that state of limbo evoked several times in the film and represented by the protagonist’s condition of stasis. Referring back to the theme of growth, seen as disillusionment, are also the songs by Andrea Laszlo De Simone, to whose words the girl dances alone in the room: “all reality is immensity / like the dream then it will dissolve / from tomorrow it will begin / a new immensity”.