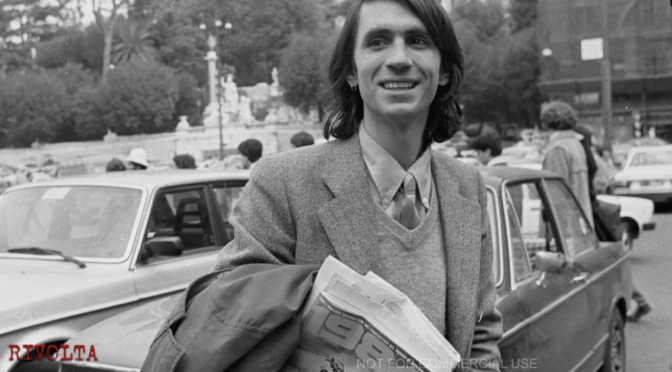 Carlo Rivolta was a young talent of Italian journalism during the ’77 protest movements, a figure unknown to most, yet capable of describing firsthand the upheavals of this historical period. The crisis of ideologies, the internal clashes of the movement and, above all, the spread of heroin that condemned him, and an entire generation, to an untimely demise.

Carlo Rivolta experienced the spread of heroin as a protagonist and recounts its use as a consumer, while also highlighting the lack of information at the time, the negligence of the state, and the psychological and physical effects on those who used it. The documentary sheds light on the proliferation of this drug in our country in a narrative that begins with the crisis of the ’77 movement and runs through some of the most important events of the post-World War II period, such as the Moro case. In addition to offering important testimonies about his own mental state, Rivolta also anticipated practices such as drug-checking, making a real analysis of the substances available in the Roman suburbs. Carlo Rivolta’s testimonies are thus a valuable find that allows us to understand what happened, and to “see” through the eyes of someone who experienced these events firsthand.

The narrative takes its starting point from the articles written by Carlo himself, recited for the occasion by Claudio Santamaria, who, as he claims, tried to capture the essence of a truth rather than a reality. In this documentary, director Marco Turco narrates a generation from the subjective perspective of the protagonist. His failures and struggles are not only his own but are a metaphor for what happened to thousands of young people in the late 1970s. In the raw violence of the stock footage, we get a glimpse of what was a true massacre, consumed without control. Through first-person written articles and the testimonies of friends, family members and colleagues we can understand the fate of an entire generation.