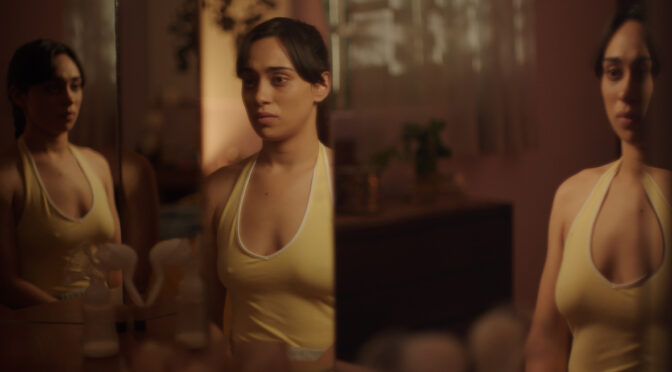 “Huesera”, in Spanish, refers to an expert in treatment of bones and joints diseases. The term, however, also designates The Woman of the Bones, a figure from Mexican mythology whose task is to gather the bones of the dead, symbol of the vital force that doesn’t wear out, and to pray until flesh returns to inhabit those remains, recreating life from disjointed parts. The bones of Valeria (Natalia Solián), in Huesera, constantly creaking, because getting her fingers and the joints of her back crinckled is the protagonist’s way of trying (and not always succeeding) to drain its discomfort out of the body, her frustrations, her ineptitudes. Tormenting Valeria is the awareness that she will soon be a mother: a motherhood apparently sought after, but intimately unwanted.

In competition in the “Crazies” section, the debut film by Mexican director Michelle Garza Cervera investigates the condition of women and the cultural and social expectations of them, in relation to the moral obligation of motherhood. Valeria, within herself, has always had the certainty that she wouldn’t be a good mother. She doesn’t even want to be one, because she’s and feels like an artisan: she feels more love for the cradle, conceived in her mind and realised with her hands, than for her daughter. Her innermost desires to escape from the duties imposed on her collapse under pressures of a twofold nature. On the one hand, certain pressures are weighing on her, from the religious culture, from her parents and in-laws, symbolically represented by traditional iconographic images of the Virgin Mary – with whom the director, at the beginning of the film, weaves a skilful game of cross-fades. On the other, certain pressures weigh because of her: she is the one who chooses to abandon her own ambitions, convinced that following the path set by others is the best solution. The recurring symbol of this introspection is the spider, represented as mother and weaver, who with her web imprisons the protagonist in her predetermined role of parent, turning the house into a prison. It’s these two visual metaphors, the Madonna and the spider, that lay the foundations for Garza Cervera’s direction and staging, whose intention is to create a game of cross-references capable of leading the spectator to discover the psyche of the protagonist.

The director hopes, for the women as for the protagonist, a real catharsis: the ritual faced by Valeria exorcises her fears and paranoia, emancipating her from a social role that has never belonged to her. It is a painful process, in which Valeria is forced to burn a part of her consciousness that she had long listened to, but which allows her the freedom she has always yearned for. And indeed, when she finds the courage to leave, she does so with her toolbox.