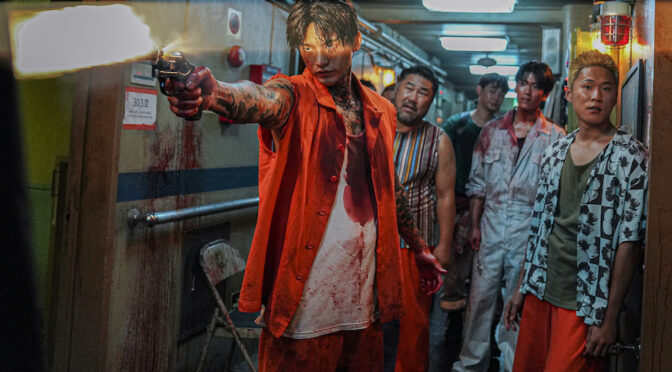 A group of extremely dangerous Korean criminals leave the port of Manila on a hyper-secured cargo ship to return home, where they will finally be tried for their crimes. What could possibly go wrong?

Out of competition at the 40th Torino Film Festival, Project Wolf Hunting is an action thriller skilfully directed by Kim Hong-Sun, which delivers everything it promises, which is to entertain and have fun, unabashedly. A hyper-kinetic but not unclear editing is the main feature, which enhances the numerous, always explicit and sometimes surprising action sequences, the production’s flagship. The director plays with the spectator’s expectations, initially outlining a classic confrontation to the death between police and criminals, good guys and bad guys, but then changing the cards on the table with the inclusion of a new crazy variable and constant twists. But the pact with the audience always remains firmly in place: the violence blazes, the blood gushes out and the post-human aesthetic that gradually takes over the film is not a betrayal so much as a reinforcement of the initial intentions.

Beneath the surface of pure entertainment, which is nevertheless excellently crafted, there is, however, far more competent writing than one might expect. Between a denunciation of the wounds caused by Japanese imperialism that have never healed and a horror turn that reinterprets the structure of films such as Ridley Scott’s Alien, the Korean filmmaker (who also wrote the film) dwells on the concept of humanity. Already starting with the film’s title, which can only refer to Hobbes’ famous “Homo homini lupus“, a narrative begins to take shape in which the characters are divided into three categories: those who aspire to be wolves, those who are hunters maintaining order, and those who are forced to become wolves against their own will. The clash involving these factions only highlights the impossibility of keeping one’s humanity intact in today’s society, which is full of ruthless men who will stop at nothing to achieve their goals. The hope is that from the ashes of this battle a new community can be reborn, one that is not afraid to treat men as men and not as wolves.