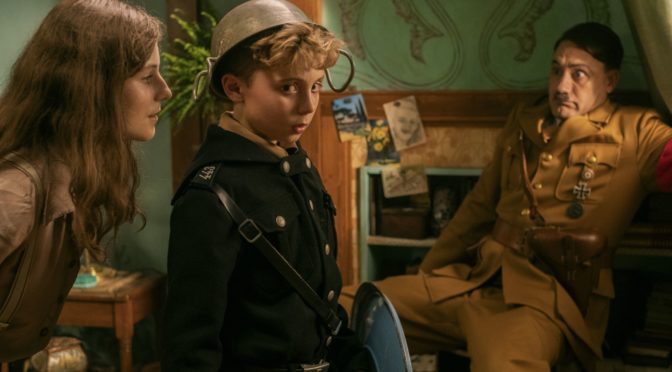 There is a double bond between Taika Waititi and the city of Turin. After the mockumentary What We Do In The Shadows, where the director explored the daily life of a group of vampires, Waititi comes back in town to open the 37thedition of the “Torino Film Festival” with Jojo Rabbit. The movie, focused on one of the most tragic episodes in the history of mankind – the fall of the Third Reich – , is characterized by irony and lighthearted tones. The filmmaker started working on this movie during the post-production of What We Do In The Shadows, but he had to wait for the right time to release it.

Nazi Germany has been the focal point of stories in cinematography. Indeed, many films have tried and succeeded to ironically show the Third Reich on the screen, by giving the opportunity to think about this matter without trivializing or using the black humor as a strategy. In these stories, the portrayal of Hitler raises a question: How can he be represented on the big screen? How can we talk about the Führer, joke with him or even mock him? If The Great Dictator by Chaplin has made the history of cinema, Waititi provides a convincing version of the fall of the Nazi regime by using a particular style and the point of view of a child.

Jojo Batzler (Roman Griffin Davis), a 10-and-a-half-year-old kid, wants to become part of the Nazi Youth group, but he has to deal with his own insecurities and his mother (Scarlett Johansson), who is hiding a Jewish girl in their house. Moreover, he has to face the expectations of the regime and his imaginary friend – Adolf Hitler himself (played by Waititi) – who appears to give him some “wise advice” when he feels sad, and to make him waver when he hesitates.

The New Zealand filmmaker creates a pastiche by incorporating different stylistic features in terms of vision, storytelling and music to amaze the audience. The beginning of the movie can be considered as a statement about the way Waititi has decided to present the fall of the Third Reich – a training that reminds us the one involving a group of boy scouts in Moonrise Kingdom (2012) by Wes Anderson. Waititi, with a music video aesthetic, juxtaposes pop imagery and young people’s passion for the Beatles with the fanaticism of the Hitler Youth group. If the premise of the film is to reach the widest audience and to attract young people to learn more about the history of Shoah – as pointed out by Roman Griffin Davis and the producer Carthew Neal at the press conference – , then the pop and (post)modern style is justified since that is Jojo’s idea. The movie keeps mixing different types of register, shifting from the tones of the slapstick comedy to those of drama. However, the irony wins out every time, whether there is a particular horror scene (for example when we see the hidden girl for the first time) or moments rich with suspense.

The purpose of the film was confirmed by the main character at the press conference. Waititi encourages young people to be themselves, explore the world, believe in their ideals, and think for themselves. Jojo wants to believe in a regime that, in the movie, appears fake and looks like a show. Instead of ideology, Nazi Germany seems to share uniforms, the “heil Hitler” greeting or small rituals, which become the subject of satire.Besides the mis-en-scène, the filmmaker focuses on acting to emphasize the sense of fiction – on his own performance, and on Sam Rockwell and Alfie Allen’s, which are over the top, while playing Nazi soldiers involved in a homosexual relationship.

Since Jojo Rabbit seems to be a teen movie and echoes older films, it is possible to spot an explicit reference to the past. If on the one hand the famous walk of Edmund through the destruction of his town ends with his own suicide in Germany, year zero by Rossellini (1946), on the other hand, Jojo’s homecoming among the rubble goes in the opposite direction – having seen war through his own eyes, the young boy starts dancing to celebrate life.