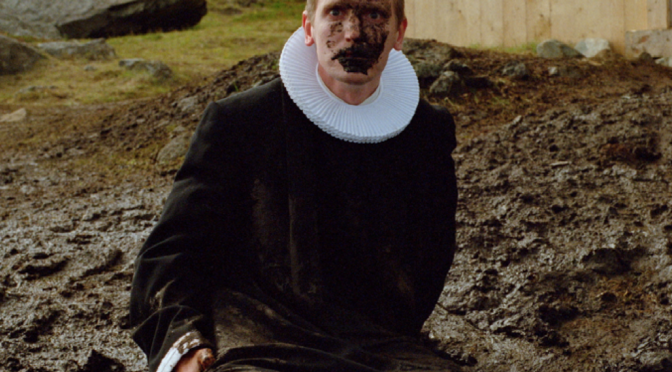 Godland, the latest film by Hlynur Pálmason, already winner of the feature film section of the Torino Film Festival with A white, white day (2019), is a frontier story, an account of a Danish priest and photographer (Helliott Crosset Hove) forced to travel across the impervious Icelandic territory in order to reach a village on the southwest coast and to build a church there. However, it is only the body that remains from the religious spirituality – the flesh of the world in its inevitable decomposition. A spirituality, therefore, that constantly falls into the viscerality of the animal flesh, into the triviality of the mud outside the churches and into the unexpected flight of a fly on the spotless face of a priest.

This consideration is part of the broader theme of the conflict between man and nature, a dichotomy that materialises into dazzling audiovisual situations showing the inability of the individual to control the external world. The body of a little girl that can’t stay still while posing in front of the camera. The bite of a snake hidden among the branches of the Icelandic countryside. The barking of a dog interrupting a sermon in the church. The current of a river dragging those who try to cross it. Reality doesn’t bend to the power of man, who can leave behind nothing but the rotten remains of his presence, such as the guts of a skinned animal in close-up or the smashed skull of a man on the rocky seashore. Remains that subsequently become fertiliser for nature itself, which, indifferent, absorbs whoever falls dead into its womb.

But even though in the game with nature a checkmate is inevitable for the individual, there is still hope for those who live in community, for those who are willing to relate to each other. And in the extreme close-ups between the two lovers – namely between the priest and a girl from the village (Vic Carmen Sonne) – the director surrenders to peaks of affection that scratch the stage on which the human tragedy is set. Nevertheless, the protagonist lacks faith in affections and intimacy, and that marks his sad fate.

Godland stages an Eucaristic rite in reverse in which the spirit is brought back to the waste of its flesh. The staticity, almost lysergic, of Pálmason’s image doesn’t leave off-screen the state of decomposition of organic bodies, showing a visual swamp where there is no distinction between mud and sky. In this land of God, in which God just became a body, salvation is still desirable, provided that man is willing to believe in the relationship with others, in the intimacy that can be built in community life, made up of affections and traditions.