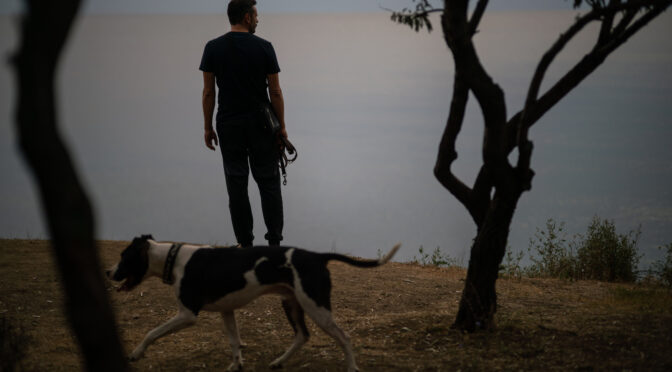 Two people are wandering in the depths of the wood; a bus drives into a tunnel whose exit cannot be seen; a thick blanket of smoke. These are just a few of the images that Stefan Costantinescu’s first feature film exploits. On one hand, the viewer can perceive the disorientation that Doru (Bogdan Dumitrache), a laborer who has emigrated to Sweden from Romania, feels upon his return. On the other, we witness his wife Nicoleta (Ofelia Popii), his teenage daughter, and his arteriosclerotic mother’s way of “welcoming” him “back” with no more than surprise and coldness; the only one to feel any genuine emotion seems to be his faithful dog Amza. Behind Doru’s unexpected return there is actually more to than the work-related reason he keeps peddling to anyone who asks: while in Sweden, Doru received anonymous messages informing him of his wife’s alleged marital infidelity. Therefore, the true purpose of his return to Romania is to verify their authenticity.

Like many of his compatriots (Cristian Mungiu, Cristi Puiu), Costantinescu is able to create glacial and frozen atmospheres, where tensions swirl without erupting, if not at their very limit. This justifies the cold and aseptic tones of the cinematography, and the indoor shots with the clear aim of “imprisoning” the protagonists. Moreover, those scenes are built with sequence-plans in order to allow the viewer to pick every single word of what the characters say to each other. The risk of epigonism is avoided because the camera, like Doru, also breaks free from staticity and begins to peddle the characters generating a great deal of suspense, in full Hitchcockian style. While witnessing this “stalking” process, we end up putting together the pieces of the image of a country where patriarchal culture still takes hold, where the woman is not even allowed to go have a coffee without her husband’s approval, while the latter’s affairs and escapades are all but forbidden.

Through a withdrawn performance, Dumitrache is remarkably effective in capturing the grotesque dimension of the broken man. Sometimes he also manages to evoke laughter in the viewer – even in the context of domestic violence in which the film is set. Nevertheless, his partner Popii also shines with a great performance of glacial irony. However, any intended or unintended trace of humor disappears in the powerful finale: it dodges the mere consolation aim and seems to suggest that even in a society where everyone is cold, violent, distant (with or without COVID-19), mean, and obsessed with IKEA, one can always find something to hold on to. It is a struggle, but it can be done; even if you are a little bit of a man, and a little bit of a beast.