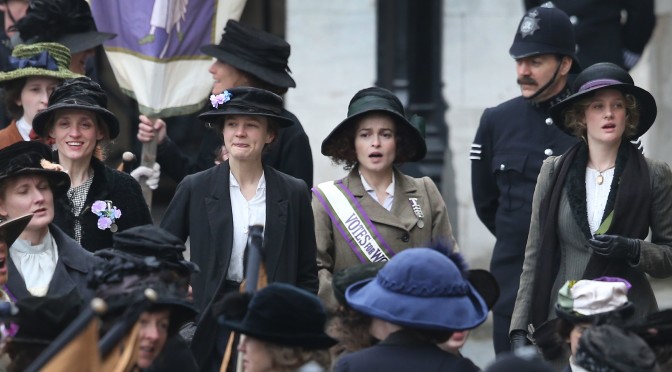 Muad (Carey Mulligan), a female worker, is the protagonist. She is a fictional character and fights together with other women, who represent really existed historical feminists like Emmeline Pankhurst (Merylin Streep). As director Gavron pointed out, the aim of this semihistorical approach was to make a connection between the women, who were given the mocking name Suffragettes and started their battle for their right to vote hundred years ago and modern women, who are still struggling with salary discrepancy, sexual violence and for their right to children protection and tutoring.

Suffragettes social movement has fought for fifty years but, if it is true that the first forty years had been a pacific struggle, in the following sixteen months the fight became more violent and cruel and almost none knows about it. The absence of films that tell us about the violence these courageous women had to endure, played a great role in persuading Faya Ward and Alison Owen to produce the film. Faya Ward stated: “We wanted the public to be aware of the importance of the sacrifices and the success related to Suffragettes fight. We also wanted to underline how their results are effective in nowadays society. We have tried to give modern spectators some contact points, in order for women not only to be politically active, but also to encourage them to be and become what they really feel they are or they could be. Our attempt was to give voice to those, who were not yet given their chance on the big screen.”

Abi Morgan, who had already been the screenwriter of movies such as The Iron Lady, emphasized that the challenge was to choose a really meaningful example of woman’s life and be able to put it in a precise historical context. She said: “On the one hand the character of Muad underlines the role of lots of passive supporters who became activists, on the other hand it investigates the reasons which persuaded women like her to put their jobs, their families and their homes at risk, in the name of a civil right”. The film focuses on the political matter and puts in the foreground these courageous protagonists, so the decision to not examine in depth personal stories was due to the fact that there are not enough literary or movie material at disposal, to which one can refer to. With reference to that, Morgan added that it was much more important to end the film with information about Saudi Arabia and its 2015 law concerning women right to vote only if accompanied by men, rather than to think at some sort of dramatization of Maud in the Hollywood style.

Sarah Gavron gave some further meaningful figures: “Still today, 66 million of women worldwide have no right to vote, 2/3 are illiterate and only 22% hold public offices. It says that the face of poverty is female and unfortunately these figures confirm it”.

The film’s aim is not only political and historical, it concerns the social matter too by denouncing and preventing the high young people abstaining rate, above all among women. Director Gavron told about the reaction of most of the female audience attending Suffragette’s introduction meetings. As she had hoped, after seeing the film, they expressed their wish to vote again because it made them aware of the sacrifices made by British feminist movement. She also reported that the troupe film (almost completely composed by women) wanted to give a clear signal during the film shooting, so they symbolically demonstrated against government by obtaining the permission to film in the House of Parliament in London, that same institutional place, which had declared against women right to vote.

Asked about a possible way to increase female presence in all sectors, starting from institutional offices, Abi Morgan answered: “We have to introduce the concept of positive discrimination and keep insisting about the importance women have within a context implying equality of the sexes. Geena Daves said “See in order to Be”: we need to have a radical attitude, to leverage the mass media but, in order to be successful, women complicity is essential”.

Faye Ward ended the press conference by making a consideration about the fact that Suffragette is a film of women who fight for their right to vote but “today the concept of fight may imply different ways. Each one of us can be what he wants to be, and this is true for both genders and all races. It is enough that we find our own voice and utter our words in every place, in political institutions or other kind of institutions.